We were keen to understand what it is like to be a greyhound owner, so we caught up with Joe Andrews one of our Digital Sales Managers who took the time to answer our questions and give us a really interesting insight into his involvement with greyhound racing.

Have you always had a passion for greyhound racing?

The short answer is no. I got into it via betting, the same as my love of horse racing. When I was at University my mate told me about a website where people posted their tips for free and factored all sorts of variables in with their reasoning. I was completely skint at the time and deposited £2 in my William Hill account (as this was the lowest online deposit limit at the time!) I started betting pence and following the most knowledgeable people. Horses and greyhounds were the most exciting things to bet on and it all went from there.

What is it about the sport that you enjoy the most?

The dogs themselves, the speed they run at is incredible. Some of the performances the stars put in just takes your breath away. From a betting point of view, it doesn’t get more exciting, with races over in seconds and the drama you tend to get on the first bend. I have a huge love for greyhounds in general, own two crazy whippets and will hopefully have Ivy when she retires.

What do you think the industry can do to help improve the sport?

It is very tough at the moment for all sports and greyhound racing is no different. The one thing I would like to see more of is media attention and coverage around the big events and races, not just the Derby. I know this is easier said than done but I would like to see more in the wider press and on social media about upcoming races and any narratives around the dogs, trainers, and/or owners.

I think getting people involved in ownership is crucial and compared to horse racing or other sports it is very accessible, especially in syndicates, so it would be good to see some set up by trusted bodies or individuals to push this more.

When did you first get involved as an owner?

I saw someone promote a syndicate on Twitter and it looked affordable, so I thought I’d give it a go. The dog was Rapido Bullet who has been an absolute legend and a lot of fun to be involved with. He’s retired now.

What has been your best memory as an owner?

There have been lots of good days so far, but when Ivy won first time up at Swindon it was very rewarding as I had purchased her from Ireland myself and we had a few quid on too. Our latest pup, Annual Sydney, is showing plenty of ability though and has won a maiden and puppy open at Monmore. I am hoping he will make the draw for the Puppy Derby (in two days from when I type this!)

How many dogs do you own and have in training?

I have just two at the moment, Tiermana Ivy who is now at Towcester with Dave Jeans. Ivy is a syndicate made up of myself, my father-in-law and brother-in-law, and two mates. She has won at Swindon, Central Park and Towcester and I’m looking forward to her having a go at Oxford over 4 bends. Annual Sydney is the other who I have mentioned above and he is with Kevin Hutton. 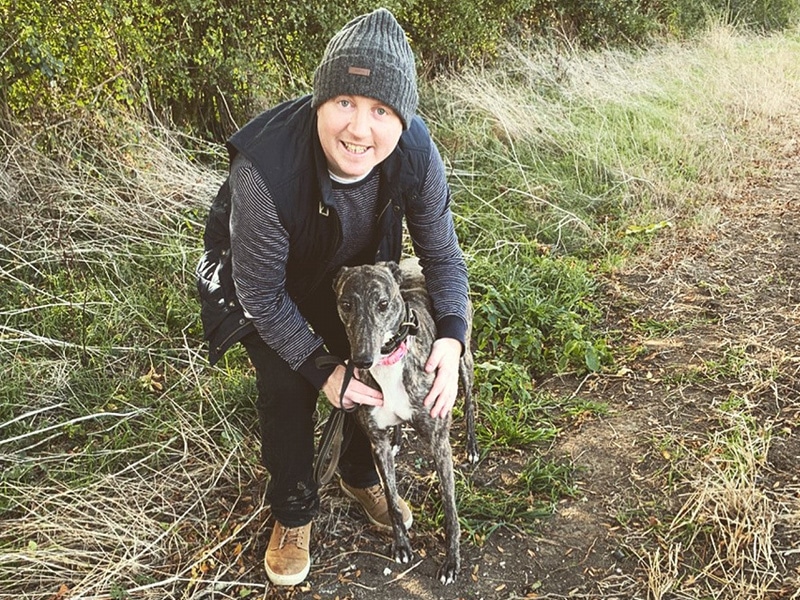 How old are all the greyhounds?

One bitch and one male.

What are their racing (pet) names?

What are their preferred traps?

Ivy is a wide runner so trap five or six but has ran well out of four too. Sydney is a middle runner but if it was up to me he’d be in three every time!

Do they have a best distance?

Ivy is a Sprinter. She is all about early pace and the 4-bend distance stretches her stamina especially at Towcester but she won over 4 at Swindon early in her career. Sydney has won a sprint at Towcester as has some amazing early pace but he’s running over 4 bends now.

What are their strengths?

Ivy is all about early speed and even at Swindon over 4-bends her splits to the first bend were some of the best there. Sydney has all the attributes you need. He has blistering early pace but if he doesn’t get out of the traps he still gets his head down and races. He absolutely loves the game.

What has been their best races to date?

Ivy had won a D2* at Central Park and had been unlucky in D1* grades there but the strength at Towcester is very good so she is a D4 winner there and even though she might win a D3 anything higher is a no go. Sydney is already a dual Open race winner even at this early stage in his career.

Do they have any bad habits when at the races or back at the training base?

Ivy has to trap otherwise it is game over. You know your fate within a second with her. She is very chilled at the trainers and lived with a dog called Pongo as she was the only one there that would put up with him! She’s got a bit more peace now as he’s just been rehomed.

Sydney doesn’t have any and just loves racing. Kevin says he is a delight at the kennels.

If all things go to plan what is the plan for your greyhound(s)?

Hopefully all roads lead to the Monmore Puppy Derby for Sydney. I’ll be disappointed if he doesn’t make the cut. Hopefully he can give a good account of himself there but you need a really good dog and a fair bit of luck in these big Cat 1 competitions.

Ivy will continue to sprint at Towcester until Oxford reopens and then she will likely trial over 4 bends there to see how she goes.