As part of SIS’s commitment to staff wellbeing, we entered a team in the Corporate 5’s Cup, a 5-a-side football tournament for businesses. We managed to pull together a squad and headed down to the Trent Park Football Centre on Friday, 15th July, for an afternoon of action. 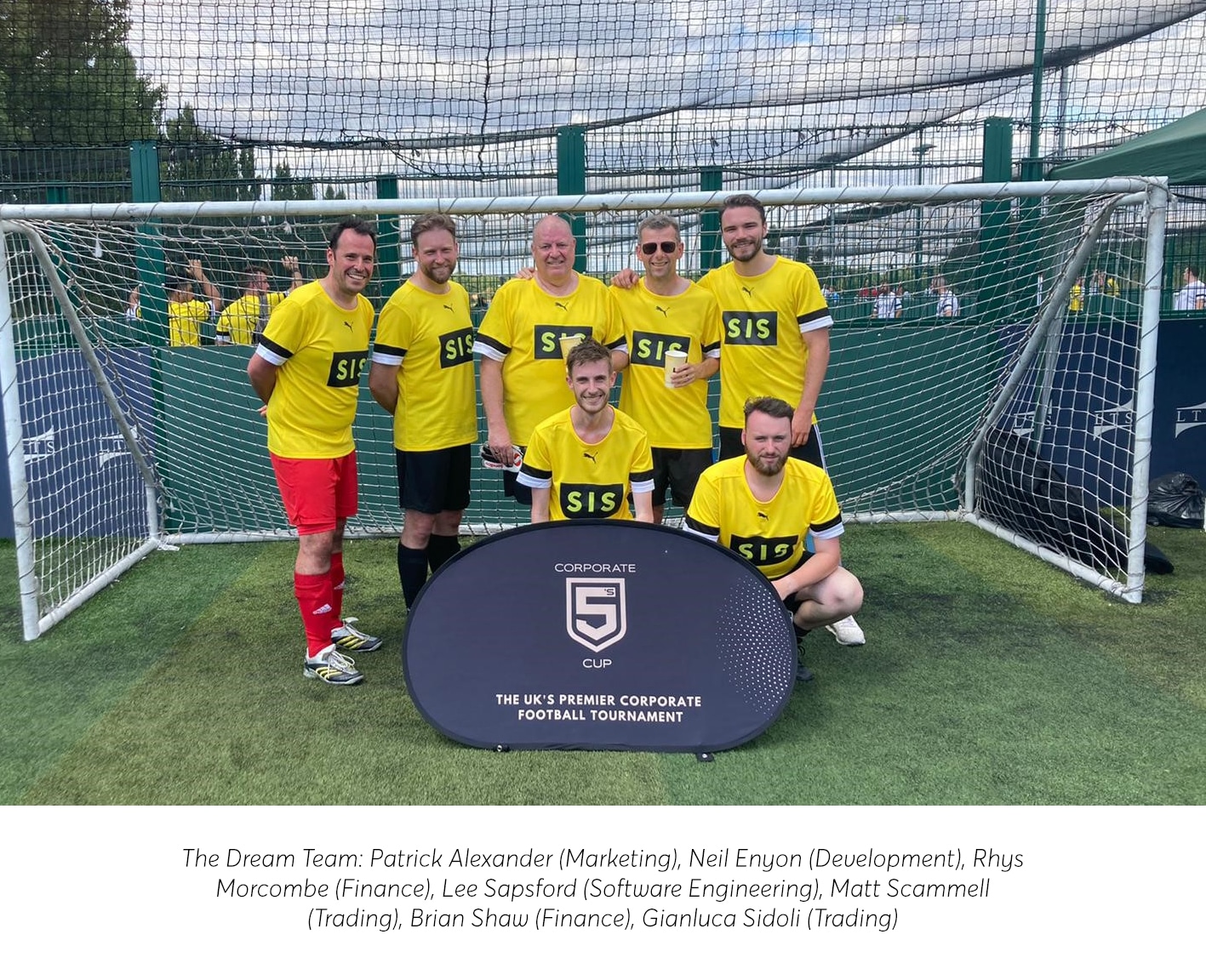 Due to the fact that our business is split over multiple sites and there has been a raft of new hires recently meant, we all turned up to the event unsure of who our actual teammates were. Thankfully we found each other and quickly got acquainted.

Looking around the changing room, it was clear that we would have a challenge on our hands, given we had the oldest average-aged squad. During the briefing, we had some good news, one of the teams in our league pulled out, meaning we were guaranteed not to come in 6th place and dead last!

After a little warm-up, we had a tactics talk from “Coach Neil,” “let’s keep it simple, two banks of two!” with those words echoing in our heads, we started the first match against Strike (Team 1).

We got off to a solid start with some good movement early on and rattled the woodwork a couple of times; our early pressure paid off, resulting in a quick couple of goals from Matt and Rhys. We kept our shape at the back and reduced the opposition to have some wild shots from a distance which hardly tested Lee in goal. We continued to dominate the match, and Gianluca added another before Matt got his second to round off a 4-0 victory. A great start, and due to the withdrawal of one of the teams, we got a 3-0 walkover for our second match and earnt a well-earned hour break which was appreciated given the heat.

What we hadn’t appreciated was that this withdrawal would lead to a fixture pile-up for us akin to the football schedule at Christmas with back-to-back matches.

The first of our back-to-back matches was against Accenture Song. This was a much tighter affair; we got off to a good start with Rhys slotting home before some confusion on the rules of the game, thanks to a silent referee, led to a quick equaliser. Matt put us back ahead with a screamer into the bottom corner before extending our lead further with an almost identical strike a few minutes later. Gianluca added a fourth to give us a bit of a cushion. Accenture responded quickly with their second goal, giving them some much-needed confidence and emboldening them to push forward. After a few more half-chances, they launched an attack which left their striker one-on-one with our goalkeeper extraordinaire Lee, who positioned himself perfectly to shut down the shot; the only downside was he didn’t quite use the most appropriate part of his anatomy, meaning we had a worrying few minutes thinking who was going to have to take over in goal. Thankfully this wasn’t Lee’s first rodeo, and he was able to continue, albeit with his voice now a whole octave higher! They managed to add a third before the final whistle blew, 4-3.

With just a 30-second break, we were straight into our fourth match against Ronnie Dog Media (Team 1), who were a step up in class from our previous opponents. We battled valiantly but wilted in the heat and ended up losing 4-0 despite some good chances from our side.

Just a ten-minute break before our next match against the group favourites, False 9, whose average age was half ours. Undeterred, we started brightly, and some early pressure paid off with a great strike from Rhys. We continued to push for a second, but a few decisions went against us, resulting in a couple of sloppy goals. Our fatigue started to set in, meaning we were starting to lose the 50/50 balls. False 9 added a few more goals before the final whistle went, 6-1. 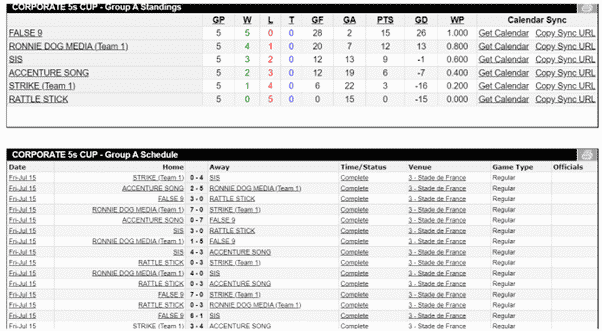 As we waited for the final results to be collated, we debated whether it was better to make the Cup competition, where we would be the underdogs but likely to get to the bar earlier, or qualify for the Plate competition, where we might be in with a chance of winning but have to wait longer to replenish our depleted electrolytes at the bar. We didn’t have to wait long; we had made it into the Cup competition as the best-placed third-placed team. Our reward was to play the top team, Digivate, from one of the other groups who, unsurprisingly, were pretty good. Two quick goals from them put us under early pressure before Matt got us off the mark following a mix-up at the back. There were three more unanswered goals from Digivate before Gianluca pounced to get our second, allowing us to end on a high note, 5-2!

Given how we thought it might go at the start of the day, we were very pleased with our efforts, and we worked well as a team, especially as we started the day as strangers to each other. It was a great opportunity for us to network internally, meet new colleagues, develop teamwork skills, and get a sweat on. I would like to thank the team for making it a great experience and also a special thanks to Charlotte Coumbe for organising everything.